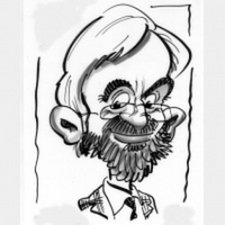 For over 50 years I’ve always used a screwdriver to discharge electrolytic capacitors (actually, not that many per annum). More recently, people have told me it’s not a good idea, and I should use a resistor. Looking into it, indeed, the very high current may damage the capacitor. Whilst I wouldn’t disagree, I’d want to push back a little on safety grounds.

With the screwdriver it’s abundantly obvious that you’ve discharged the capacitor, from the sharp CRACK it makes. (It always startles me, even though I’m expecting it.)

Actually, most of the energy may well be dissipated through the spark, which will start when the screwdriver comes within a few thou of the 2nd capacitor terminal, so it may not be quite such a terrible idea.

With the resistor there’s no indication when you’ve held it there long enough. Worse, you wouldn’t know if the resistor or its connections had gone open circuit (far from unknown with flexible leads) leaving you at risk. OK, you can check it with a multimeter but some peope will forget or just not bother.

The screwdriver can be manipulated with one hand and it’s easy to find one with a very well insulated handle. Unless you’re an expert with chopsticks you’ll probably need 2 hands to apply the resistor. Should the insulation be inadequate the electric shock is likely to traverse your chest - the worst. The chances are, not all amateur fixers will adequately insulate their dischargers.

I would suggest there is a market niche for a professionally designed and manufactured capacitor discharger.

As for the visual indication, a neon is the obvious way but it won’t light with less then 150V and will extinguish at 90V (though a search did throw up a 12V neon - not sure how that works!)

But equally compact would be a 400V surface mount bridge rectifier feeding a LED through a constant current circuit using a high voltage depletion mode mosfet. This would continue to illuminate down to a few volts. 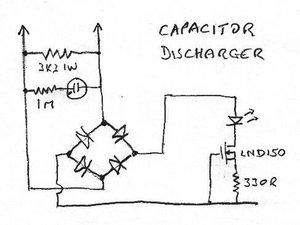 So iFixit, what could you come up with?

You do not indicate what value of capacitors that you are discharging, this could affect the cct used.

I fear you miss the point. I'm not just discharging one capacitor, but a different one in each piece of equipment I work on. But as a guide, at a minimum it needs to be able to cope with a switch mode power supply containing a 1000µF capacitor charged to 300V.

Thanks for posting on this forum with your great suggestion. Your analysis is very thorough, and I’ve passed your feedback to our product development team. If any wind picks up, I’ll be sure to let you know. Thanks and keep those creative juices flowing!

Hi @jogihara - I seem to have become obsessed with constant current sources when I discovered that a 400V depletion mode MOSFET was a thing. A disadvantage of my original design is that the LED will remain at constant brightness until the cap discharges to just a few volts, giving you no indication of how it's doing. If you replace the MOSFET with a 33k resistor, the LED current will fall from 9mA at 300V on the cap to 1.2mA at a safe 40V. But it may still take a while to extinguish. So it'd be worth putting a 20V zener in series with the resistor and the LED so that it does actually go out once you're down to a very safe voltage.

That will also save a few £/$'s as the MOSFET isn't the cheapest.

Perhaps you could pass these additional thoughts on to your dev team before they think I'm some sort of mad professor with my over-engineered solution!